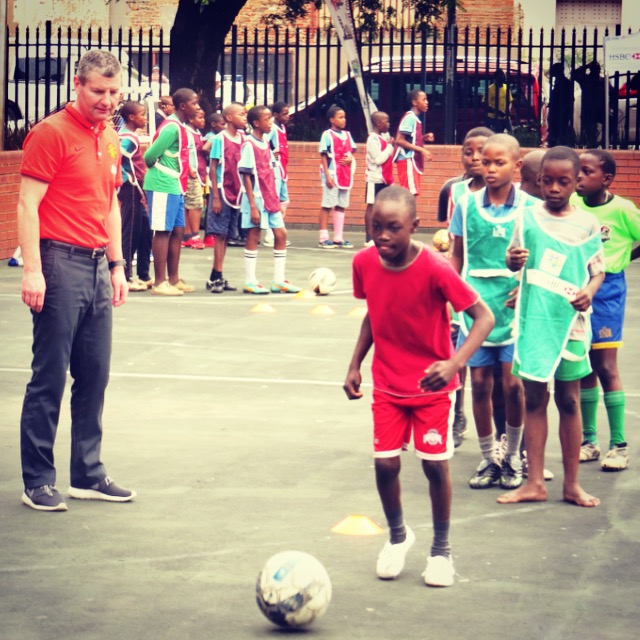 The visit was facilitated by Coaching for Hope in conjunction with The British High Commission and involved the Football Legends visiting our project site in Johannesburg and meeting the young people we work with. Our HSBC sponsored programme 'Inner City Ambassadors' works in Inner City Johannesburg with a range of children from vulnerable backgrounds, including young people not in education, employment or training (NEETs) and children living with HIV/AIDS. We also work with children who live on the street for a catalogue of reasons, including the death of their family or running away to escape domestic abuse.

Life on South Africa’s streets is perilous.  Children are surrounded by high levels of violence and substance misuse, whilst suffering inadequate nutrition and prolonged exposure to cold and damp conditions. They are some of the most vulnerable people in society.

Our programme draws on the universal passion for football to entice children into learning. Once they are engaged, we encourage children to attend regular sports sessions and develop trusting relationships with them. We can then help them access services that provide nutrition, shelter and education.

We also deliver informal education on their rights as children, health and wellbeing. For example, substance abuse and sexual health, including HIV/AIDS awareness – all of which are a very real threat in the lives of such marginalised children. These steps are all crucial in securing the children’s re-integration back into their communities and wider societies.

Bryan Robson OBE joined Manchester United in 1981 where he became the longest serving captain in the club's history. He stayed for 13 years as a player, scoring 99 goals in 461 appearances for the club. In March 2008, 14 years after he had last played for them, Bryan returned to the club to become a Global Ambassador and give back to the footballing world.

Denis Irwin is also a Manchester United Global Ambassador alongside Bryan. Denis played at Old Trafford between 1990 and 2002 and established himself as one of the most important players in the United team that won a host of domestic and European trophies in the early 1990’s. Irwin is regarded by Alex Ferguson as, pound for pound, his greatest ever signing.

The Captain of Inner City Ambassadors F.C, John Maluleke, was delighted by the visit and thanked the British High Commission, Coaching for Hope and Manchester United Legends for making it possible. “This was a huge success and our youth were very happy to meet the Football Legends from their favourite football team in person.”