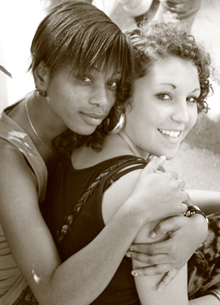 Danielle King, a student from Leicester, spent her summer holidays working with young people in Tanzania to help them learn English and raise awareness of malaria through performing arts.

Having studied drama for several years, Danielle (19) was in a good position to share her skills with students at Tanzania House of Talent but from day one she faced a huge challenge as she spoke no Kiswahili and the young people she was working with had only a few words of English.

"The language barrier was a big challenge, but as the weeks went on and I grasped some Kiswahili and the students learnt English it became easier. By week 10 of my placement the 20 dance students had reached a basic level of English so I moved on to one-to-one lessons to help five of them build their vocabulary. They are keen to learn English so that they can develop their careers as dancers or choreographers, work with musicians around the world and support their families.

The students quickly became interested in drama when I showed them how it could help them in their careers.  My challenge was to find out what would appeal to the group, so I began by showing them how drama is used by singers and dancers all the time they’re on stage."

The students will soon have a chance to put their new drama skills into practice. Before she left Tanzania Danielle worked on a new radio script of a play to raise awareness of malaria, which the students are recording for broadcast. 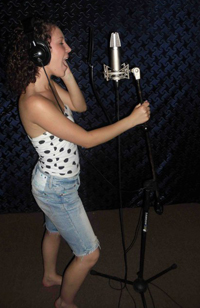 Building skills for the future

Through her flexible approach, Danielle also gained new life skills. "My confidence improved dramatically as I realised I have a skill I hadn't seen before – teaching. The skills I’ve developed have opened my eyes to more jobs and opportunities. I've found stuff about myself I didn't know I could do before! My attitude to life has changed in lots of ways; I’m not as materialistic now and I'll go home with a different head on my shoulders.

I've learnt a lot about life that will help me in the future. I understood more about development as I got to know the local community and saw the disadvantages that the students faced every day and how people really struggle to get by. It will always stick in my mind that some of the teenagers I met live on the streets, have no parents and survive on less than £2 a day with no support.

It’s made me look at other opportunities in life such as teaching and youth work and I may actually pursue this as a dream, but for now Tanzania has opened my eyes to a new world.  The bond I had with the teenagers and the friends I made, I will never forget."

In September 2011, Danielle returned to Leicester with greater confidence and awareness of her strengths, new friendships and a positive outlook for her own future.  Danielle volunteered with Skillshare International through the International Citizen Service programme, funded by the Department for International Development.  ICS gives volunteers aged 18-22 the opportunity to contribute to development projects that are designed to bring about lasting change.

THT works with talented young people to develop their natural talent and help them to build positive futures and sustainable livelihoods.  The centre generates an income by putting on performances at corporate functions, festivals and other events.  60% of the income is given to the young performers as a living allowance, and 40% contributes towards the centre's running costs, including providing nutritious meals for the young people six days a week.